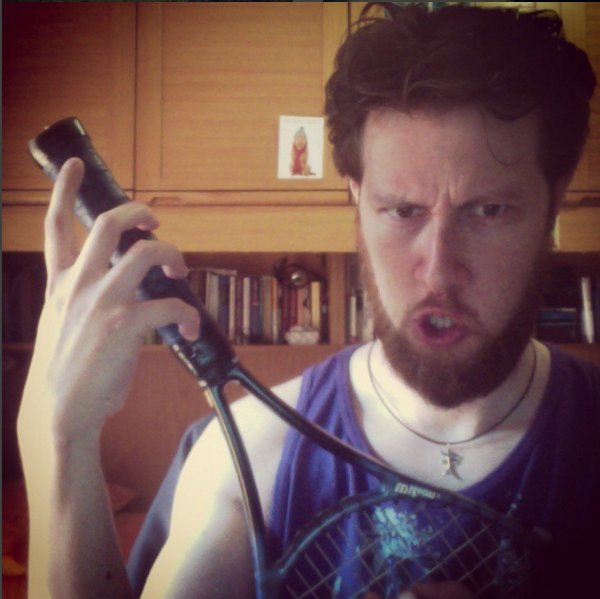 Admit it: you simulate the sound of a tennis ball once in a while. Don’t you? Liar.

Admit it, guitar player: you faked playing a killer solo on a tennis racket at least one time in your life. Don’t you? Liar.

(we tried the brooms, but don’t tell me that they are ergonomic! Those are for singers who want to imitate Freddie Mercury)

I don’t know why but that dull but defined sound attracted me. I started to play tennis at about the same age that I had my first guitar. I don’t think it was a coincidence (because there are no such things as coincidences). Come on, the body shape is the same. Both guitar and racket have strings and produce sounds. With both you can pretend to be good at something. It’s the guitarists sport. Period.

I know, many musicians don’t get along with sport (at least until moving up & down amplifiers and speakers from the car is accepted as an Olympic sport; can you imagine how many talents would come out?); yet, I have always found an artistic dimension in the champions’ shot perfection, and in the psychological challenges a sportsman has to face.

Now, you certainly are waiting for this, let’s go with the TOP 6:

6 – THE RACKET – GUITAR. Yes, I have already mentioned before, but when I strummed alone in my room, dreaming vibrant crowds, using the paddle as a guitar pretending to play easily the fastest Petrucci’s notes… I assure you that this funny thing has kept alive my ambition (in addition to the fact that you can do it by moving your body like crazy, unlike Big John).

Anyway, I can’t reach the greatness of this guy:

5 – GRAND SLAM and NUMBER 1. A tennis player has two things in mind: winning a Grand Slam tournament and become the number 1 in the world. He practices and trains himself everyday to achieve these goals, and he can only achieve them by winning. He can only win if he improves. If you are convinced that you can be a better guitar player, most likely you will become one. If you are convinced that you can be a guitarist, probably you will become too. If you are convinced, well, nobody can stop you, not even Chuck Norris with his roundhouse kick. This clarity of purpose has always helped me along the musician path, and will continue to do so.

4 – DEVELOP DIFFERENT TECHNIQUES. Great champions handle all kind of shots, or most of them. Service, forehand, backhand, volley, lob, drop shot… This allows them to choose the best shot at the best time. And also to explain friends what a lob is during a dinner. A guitarist who masters many different techniques increases its expressive possibilities (“Do you want that tapping thing? Hell no, I’ll make an out-of-tune bending, because I can!“). In addition both individuals can have the “touch”, which describes the sensitivity of the hands. And if you have the “touch”, surely you will inflame the crowd. And if you inflame the crowd: game set & match.

(plus, if you are good at forehand and backhand you can make nice sweaters)

3 – THE ROLLING SILENCE. A gig has a lot in common with a great tennis match. The crowd, the pressure, the expectations. After each song (if you are not playing like crap), you get the applause of the two long-hair guys in the front row, as well as after each tennis rally. And then, silence. That silence colors the wait, as well as a pause in a song gives a hint to the melody. In that silence-waiting your mind becomes a chaos room, while everything around you is stopped. An orchestra of thoughts shows up toghether with an interior monologue that tries to fill the silence. Learning to manage it, and to enjoy that moment, you will play the next point, or the next song section, in the best way.

2 – FIGHT YOUR DEMONS. When I was a child my tennis master used to make me train against the wall. He said “You can’t beat the wall, so you can only improve playing against him.” Indeed, as I pulled strong, the ball came back to me stronger, and as I pulled more angled, I had to run more. The only flaw in this training method is that it completely deters you from playing a drop shot, because you already know that the wall will put it back even shorter and you can’t catch that ball again. However, later I realized that the wall wasn’t the real opponent, but it was a reflection of myself. Sometimes when we are under pressure it’s easy to become our enemy. We all have our demon that visits us in times of trouble, and tells us “you are playing like a koala“, “your backhand is frightening the sparrows“, “great lick, too bad you had to play it the measure before” (yes, my demon is quite sarcastic). So, one day I came to training with a bazooka. Bazinga, “invincible” wall. When you are going to play the guitar solo the demon arrives just in time, and you have to kick his ass. How? Don’t think. Play.

1 – NEVER GIVE UP. Original? No. Easy? No. Necessary? Sure. There is a really tragic, or extraordinary, aspect in tennis depending on who smiles at the end. You can play the best match of your life, but if you lose the last point, you lose. It’s like when you play cards with your grandparents: you beat them for nine times, and at the tenth they say “winner of this round is the winner” and you lose, of course. In this sport you can’t rest on your laurels. It’s not over until it’s over. This forces you to stay focused all the time, but also not to lose heart at a hard time, because you know that you can turn the game around at any moment. And this is true in life and in music. Daily training, both technical and mental, builds your tomorrow success. You will get it wrong again, again, and again. Until you get it right. Until you’re on that stage without even realizing it. Or until you win the Australian Open when you’re 28 years old against the strongest player ever.

Do you agree, Angelique?

Maybe I like winning easily. Not really, but this is a home-field match, you can’t disappoint your crowd.

Because it’s still you.

P.S. If my tennis-racquet pic made you think “What a nice guy!“, then follow me on Instagram!